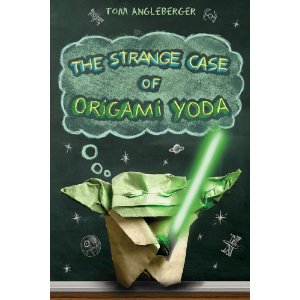 The biggest beef I have with Tom Angleberger’s book The Strange Case of Origami Yoda is that the Yoda it directs you to make looks NOTHING like the Yoda on the cover.

I mean, look at it … how cool is that? Even without the light saber, the cover is light years ahead of the one you’ll make: 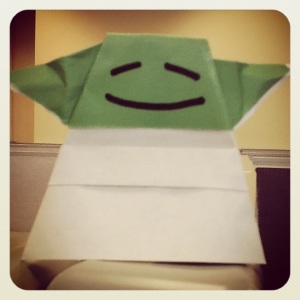 Go ahead. Try it yourself.

Of course, the one you’ll make is modeled after one made by a middle-school boy, so I guess you get what should expect.

That’s probably a metaphor for the book as well, since it tries to come off like a Diary of a Wimpy Kid, but with a cooler concept. All you’re left with is the cool concept, but lacking the punch of the original.

I laughed out loud at the first Diary of a Wimpy Kid. Out loud. In this book, I chuckled a few times and smiled some, but it didn’t have that unexpected punch.

It’s good, but not great. It reads quick, so you don’t get bogged down with it.

And that’s how they get ya! So, good job Mr. Angelberger, if the story doesn’t get them, the concept will.

One thought on “Off-topic book review: The Strange Case of Origami Yoda”